Team U Wins in PalarOlympics 2016

Posted on by upaamb-infocomm on October 5th, 2016 | Comments Off on Team U Wins in PalarOlympics 2016

Teams U and P competed at the 6th PalarOlympics on September 10 at Assiniboine Park. Members demonstrated strategic skills, sportsmanship and teamwork in playing Filipino games such as Sungka, Patintero, Sipa, and Tumbang Preso.

Members of each team were determined through the traditional “kampihan” method. Both teams finished the Chinese Garter game with equal points. Team P had the most number of points in Sipa but Team U dominated the competition by winning in Patintero and Tumbang Preso.

The PalarOlympics would have not been possible without the officers and members who came on that beautiful weekend. The delicious potluck, conversations, and laughter completed the event. 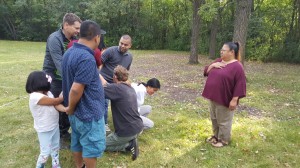 Design by WPExplorer
Back To Top +